Yellow Brick Road, A Tribute to Elton John, from Augusta Maine, is a full concert tribute, complete with an incredible light show and sound system!

Every detail of an actual Elton John concert is presented in such a way that will have Elton John fans screaming for more! 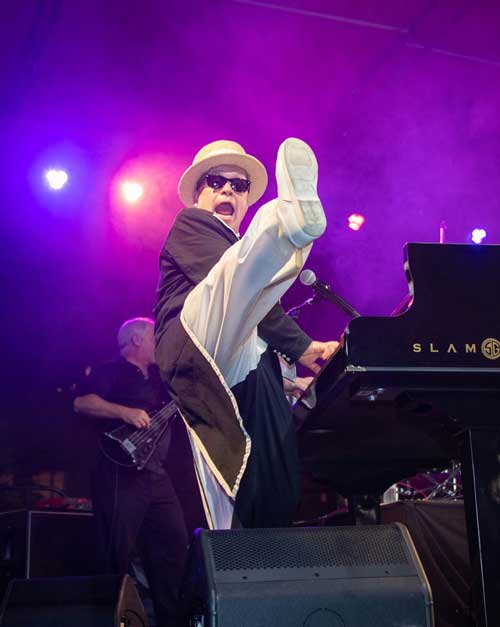 GERALD BRANN- Gerald has a degree in jazz piano from the University of Maine at Augusta and has been performing professionally for over 35 years. Since the early eighties, Gerald has performed in many bands, most notably "The Barking Spiders", "Ultimate Sin" (An Ozzy Osbourne Tribute) and "The Deal". Gerald also plays keys in the high energy rock band!

RICH D'AIGLE - Rich has spent nearly 40 years as a professional musician. He's played around the world and has shared the stage with many greats, including the legendary James Brown. Rich also does professional voice over work!

MIKE TOBIAS - Mike has been playing in bands for well over 35 years. He's performed with such groups as "The Deal" and "The Barking Spiders"

MARK KAVANAUGH - Mark is a professor of Psychology and an extraordinary bass player , both are necessary traits for this band. He plays a fretless Steinberger (much like Dee Murray) and has decades of experience. He's played with such groups as "The Barking Spiders" "Rush Hour" and "Lackee's Magnito."

KEVIN OSTROWSKI - Kevin has been drumming for over 30 years and since 1994, continues to perform with the classic rock band Sun Dog! Kevin was originally a native of the Pennsylvania rock scene in the late eighties, playing in such bands as “Hat Trick” and “Defiant.”